EKINOPS (Euronext Paris – FR0011466069 – EKI), leading supplier of telecommunications solutions for telecom operators, has published its 2018 half-year financial statements (for the period ending June 30, 2018), approved by the Board of Directors at its meeting held on September 25, 2018. These half-year financial statements were subject of a limited audit review, and the corresponding report was issued by the statutory auditors. 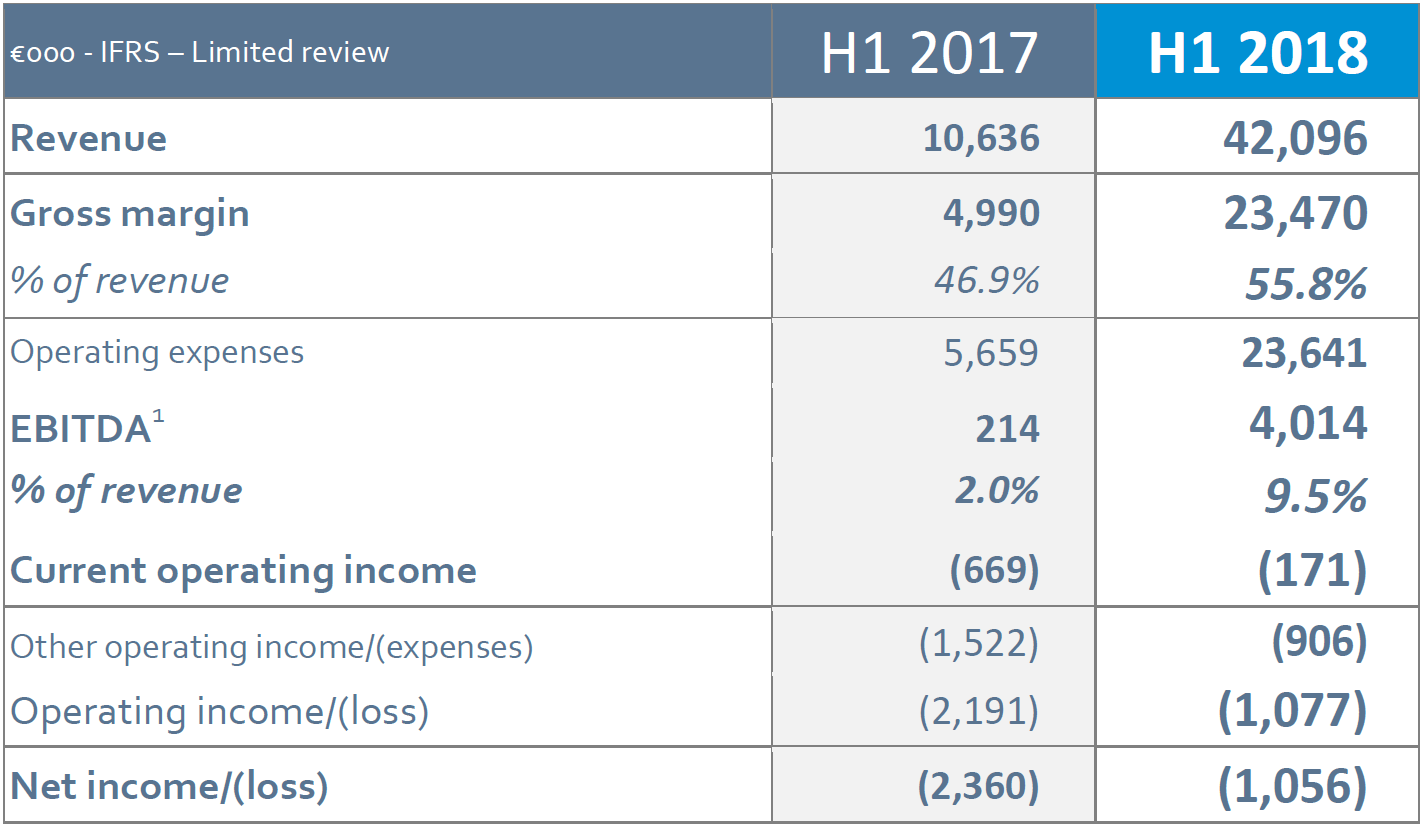 (1) EBITDA (Earnings before interest, taxes, depreciation and amortization) corresponds to current operating income restated for (i) amortization, depreciation, provisions and write-offs, and (ii) income and expenses relating to share-based payments.

This sales momentum was particularly strong amongst the Group’s key clients with growth of 25% in the Top 10 clients in H1 2018 (vs. pro forma H1 2017). Major operators are especially encouraged by the change in scale and support the strategy of virtualization as well as gradually integrating layers 1, 2 and 3 of the network.

The first half gross margin amounted to €23.5 million, reflecting stronger growth than that of revenue over the period. The sales of IP service products (routers and virtualized products) increased and margins improved slightly in this business line. It clearly shows the value operators place in the new OneOS6 software platform which enables them to step up the deployment of services and thus generate client revenue. Secondly, the improvement in production costs for EKINOPS 360 transport products also yielded results in the first half.

The gross margin thus represented 55.8% of first half consolidated revenues, compared to 46.9% a year earlier. This level is largely in line with the group’s goal to achieve a gross margin of between 50-55% over the long term, taking into account the impacts of changes in the product mix and the current price pressure on certain electronic components.

First-half EBITDA amounted to €4.0 million, compared to €0.2 million in the first half of 2017, driven by the gradual and efficient implementation of the new organizational structure, effective since early 2018. Operating expenses were tightly controlled following the acquisition of OneAccess and turned out below the expected level.

Other operating expenses (€0.9 million) consist exclusively of the earn-out adjustment relating to the OneAccess acquisition. The operating loss amounted to €1.1 million.

The first-half 2018 consolidated net loss came to €1.1 million, compared to a €2.4 million loss one year earlier. (1) On June 30, 2018, the group finalized the purchase price allocation of OneAccess and its subsidiaries. Certain items were impacted by the retroactive effect of this allocation. Figures for December 31, 2017, were restated to reflect these impacts; certain line items therefore differ from the consolidated balance sheet presented in the published 2017 annual financial report.

Borrowings decreased sharply to €10.8 million in the first half, down from €18.5 million at the end of 2017, mainly impacted by a reduction in factoring liabilities.

This full first half of OneAccess’s consolidation within EKINOPS has already demonstrated the benefits of the acquisition. Business momentum is strong, with operators and service provider clients opting for EKINOPS’ technological solutions, both for transport and access. Synergies are gradually being developed, drawing in particular on both client bases.

The convergence of network layers 1/2/3 and the shift towards virtualized services, increasingly sought after by customers, are some of the group’s primary growth drivers. Joint development programs for new products identified as having high growth potential (EAD 10G / 100G, POT, etc.) were launched during the first half of the year.

In terms of operations, the new organizational structure, which is now fully effective, was successfully implemented with strict control over costs during the integration phase. With this phase complete, in the second half of the year the group undertook additional investments, including human resources, in order to prepare for the development and marketing of future solutions.

In this context, and taking into account the better-than-expected mid-year results, EKINOPS is increasing its guidance for 2018: the group aims to achieve consolidated revenues of more than €82 million (up from €80 million initially and pro forma 2017 revenues of €73.8 million), with an EBITDA margin of at least 5% (compared with a positive EBITDA margin initially), while making investments to prepare for future developments.

All press releases are published after Euronext Paris market close.