EKINOPS (Euronext Paris – FR0011466069 – EKI), a leading global supplier of telecommunications solutions for telecom operators, has published its audited annual results for 2018 (FY ended December 31, 2018), approved by the Board of Directors at its meeting held on March 25, 2019.

The corresponding report was issued by the statutory auditors. EKINOPS France (formerly OneAccess) and its subsidiaries have been fully consolidated within the Group’s financial statements since October 1, 2017. Accordingly, the FY 2018 represents the first full year of consolidation of EKINOPS France. 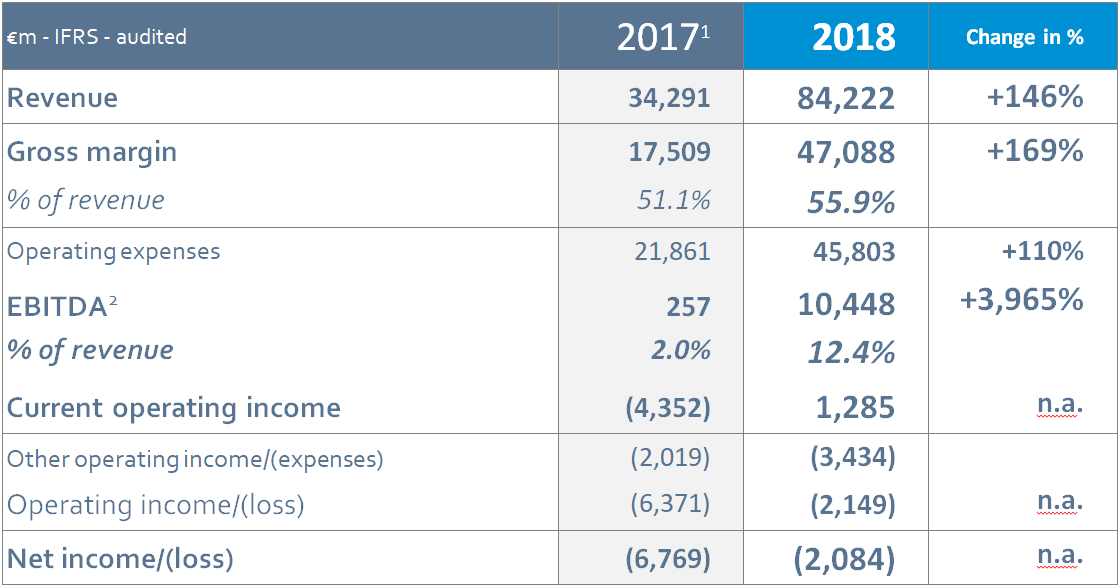 (2) EBITDA (Earnings before interest, taxes, depreciation and amortization) corresponds to current operating income restated for (i) amortization, depreciation, provisions and write-offs, and (ii) income and expenses relating to share-based payments.

At the end of FY 2018, EKINOPS full-year consolidated revenue amounted to €84.2 million, up 146%, exceeding the annual target which was raised from €80 million to €82 million mid-September. On a pro forma basis, with the consolidation of OneAccess and its subsidiaries backdated to January 1, 2017, year-on-year revenue growth amounted to +14% (vs 2017 pro forma revenue of €73.8 million).

This excellent performance reflects the strong interest shown by major operators and service provider customers for Ekinops’ technological solutions, at a time when network layers are converging and there is a shift towards virtualized services and Software-Defined Networks (SDN). Average growth for the Top 10 clients amounted to +32% in 2018 (vs 2018 on a pro forma basis).

In addition to this buoyant performance, the group posted record gross profits of €47.1 million, up 169% for the period. The gross margin represented 55.9% of consolidated revenues (vs 51.1% a year earlier). This exceeds the group’s target of achieving a gross margin of between 50-55% over the long term, a target that takes into account the one-off impacts of changes in the product mix, sales cycles and occasional price pressure on certain electronic components.

EBITDA amounted to €10.4 million, up from €0.3 million in 2017. In addition to the steep increase in gross profits, the Group capitalized on the new organizational structure implemented in early 2018 after the merger with OneAccess, which came with stringent cost control throughout the consolidation phase.

The increase in operating expenses was limited over the FY, especially for overheads, administrative expenses and R&D expenditure.

The EBITDA margin was reported at 12.4% of revenue, exceeding the revised targets set during the year and compared to 2.0% year-on-year and 9.5% at the end of the first half.

After taking into account net depreciation, amortization and provisions (€8.9 million) and non-cash expenses relating to share-based payments (€0.3 million), current operating income amounted to €1.3 million in 2018, compared to a loss of €4.4 million a year earlier.

Other operating expenses of €3.4 million mainly include the adjustment to the earn-out related to the acquisition of OneAccess in light of the performance achieved in FY 2018. The operating loss thus amounted to €2.1 million, compared to a loss of €6.4 million in 2017.

As regards financing flows, net loan repayments amounted to €3 million over the year.

Ultimately, the change in cash and cash equivalents totaled €3.8 million in 2018.

The excellent results of FY 2018, which exceed expectations, reflect the success of the merger with OneAccess since late 2017, in terms of sales, finance and technology.

As far as optical transport solutions are concerned, the year was marked by the commercial success of FlexRate 100/200G solutions, which were successfully installed in the networks of 15 new customers in just a few months, with a focus on North America. This new Flexrate range was completed by the new ultra-low latency encryption module, PM CRYPTO, and at the very end of the year, with the launch of the 400G module.

In terms of network routing and virtualization, 2018 saw the launch of a new range of routers enabling operators to provide enterprise services at fiber speed on existing copper installations. EKINOPS has also launched a range dedicated to the SME market (business-in-a-box solution, ONE425 / ONE545 routers) enabling operators to provide IP voice and data services at a price geared to the SME market. In terms of network virtualization, the year also saw the first deployments of OVP (Open Virtualization Platforms), which demonstrate the relevance of implementing communication services based on virtualized solutions and managed by software orchestrators.

In 2019, EKINOPS is committed to pursuing the roll-out of new solutions, notably in the areas of switching and routing and for the deployment of virtual network functions (VNF). EKINOPS is also pursuing its software development activities for SD-WAN (Software-Defined Wide Area Network) solutions.

To drive all these developments and market future solutions, the Group plans, in 2019, to boost the investments initiated in the second half of the year, particularly in human resources, by hiring around thirty new employees, two thirds of whom will be dedicated to R&D.

EKINOPS intends to pursue its dynamic development in 2019, through organic growth in both optical transport solution and access activities, and by leveraging commercial and technological synergies resulting from the merger.

Moreover, given the successful integration of OneAccess into the Group, EKINOPS is keen to continue to seize strategic, value-creating external growth opportunities.

Following press reports, EKINOPS announced on October 18, 2018 that it had initiated preliminary discussions with Nokia Corporation regarding a possible acquisition of Alcatel Submarine Networks (ASN).

Since that date, EKINOPS has continued to study the possible acquisition of ASN and have been discussing deal terms with Nokia Corporation. No agreement has been reached with Nokia to this day. The success of EKINOPS current strategy is shown by the strong results announced today, and the combination of ASN and EKINOPS would mark another key milestone in the development of Ekinops.

Pursuant to statutory and regulatory obligations, EKINOPS shall inform the market if an agreement is reached or if discussions with Nokia Corporation are discontinued.

All press releases are published after Euronext Paris market close.